TAMPA, FLORIDA – JANUARY 16: Tom Brady #12 of the Tampa Bay Buccaneers walks off the field after losing to the Dallas Cowboys 31-14 in the NFC Wild Card playoff game at Raymond James Stadium on January 16, 2023 in Tampa, Florida. (Photo by Mike Ehrma

TAMPA, Fla. – More than 60,000 people filled Raymond James Stadium Monday night for the NFC Wild Card playoff game between the Cowboys and the Tampa Bay Buccaneers. Despite the best efforts of Brady and the Bucs, the team fell short, ending their season with a 31-14 loss to Dallas.

Tampa Bay defeated this Cowboys team earlier in the season but couldn’t pull off the second win to go to the playoffs.

The team went through a season of ups and downs with injuries and inconsistency on offense, but the team that took the field Monday appeared to be the healthiest Bucs fans saw all season.

Despite that, Dallas quarterback Dak Prescott outplayed Tom Brady, throwing for four touchdowns and running for another to lead the Dallas Cowboys to its victory. 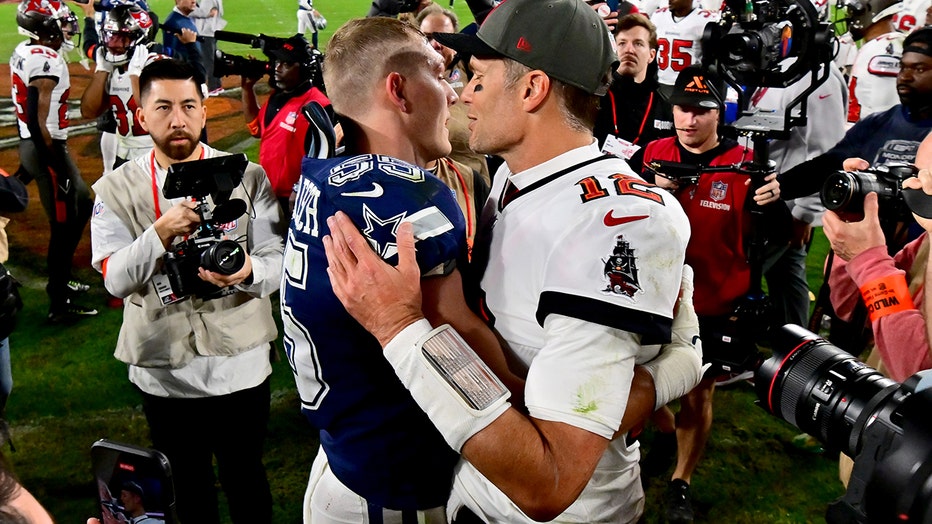 TAMPA, FLORIDA – JANUARY 16: Leighton Vander Esch #55 of the Dallas Cowboys and Tom Brady #12 of the Tampa Bay Buccaneers embrace on the field after their game in the NFC Wild Card playoff game at Raymond James Stadium on January 16, 2023 in Tampa, F

Prescott completed 25 of 33 passes for 305 yards and played turnover-free ball for the first time in eight games as the Cowboys (13-5) dominated the listless Bucs (8-10) in what may turn out to be Brady’s last game in a Tampa Bay uniform.

The Cowboys had dropped eight straight playoff games on the road since winning the NFC championship game in San Francisco on Jan. 17, 1993.

Brady, who signed with Tampa Bay in 2020 and led the Bucs to a Super Bowl title two years ago, will be a free agent this winter. He retired briefly last February before changing his mind and returning for a 23rd season at age 45. 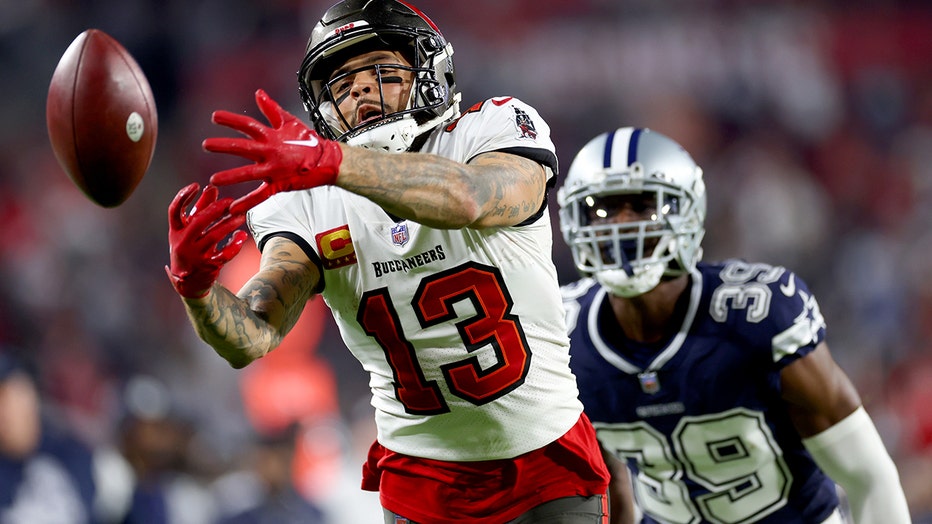 TAMPA, FLORIDA – JANUARY 16: Mike Evans #13 of the Tampa Bay Buccaneers attempts to catch a pass against the Dallas Cowboys during the fourth quarter in the NFC Wild Card playoff game at Raymond James Stadium on January 16, 2023 in Tampa, Florida. (P

About the only thing that went wrong for the Cowboys on Monday night was kicker Brett Maher missing his first four extra points, becoming the first player in NFL history to miss that many in a game. Maher finally converted on his fifth attempt after coach Mike McCarthy decided against sending him out to try a field goal from roughly the same distance as a PAT.

After the game, the Bucs and fans turned their attention to Tampa Bay receiver Russell Gage, who was strapped to a backboard and carted off the field after an injury late in the fourth quarter. 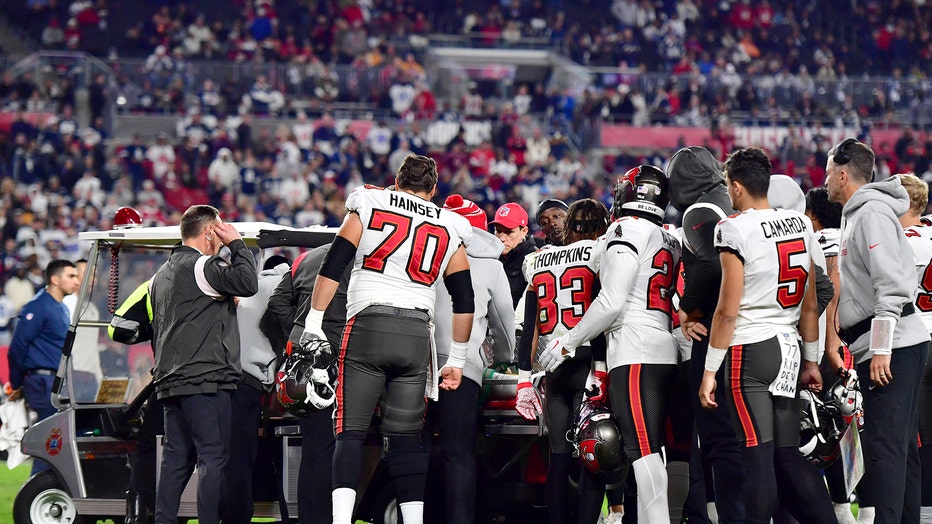 TAMPA, FLORIDA – JANUARY 16: Russell Gage #17 of the Tampa Bay Buccaneers is carted off the field after suffering an injury against the Dallas Cowboys during the fourth quarter in the NFC Wild Card playoff game at Raymond James Stadium on January 16,

Gage slipped and fell to the turf while running a route and took a blow to the neck area as he went down. He was unable to get to his feet and silence fell over the stadium as players took a knee and medical personnel tended to him. 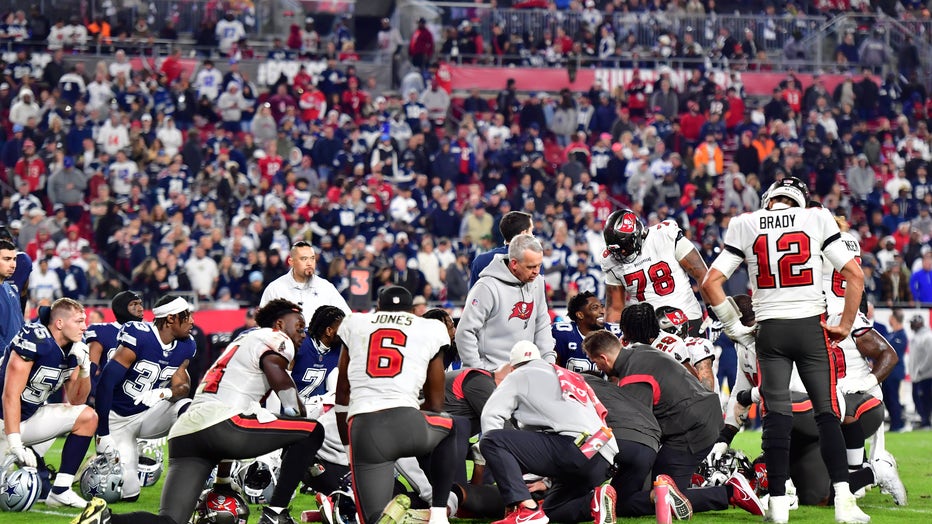 What changed with the Bills-Bengals cancelation?

Players and fans watched in horror on Jan. 2 as Buffalo Bills safety Damar Hamlin collapsed on the field at Cincinnati when his heart stopped and he received CPR before leaving the field in an ambulance. Over the next week, those same players and fans reacted with joy at the news of Hamlin’s recovery.

Even better news came Saturday: Hamlin visited with teammates at the Bills’ facility for the first time since being discharged from a Buffalo hospital.

A person with direct knowledge of Hamlin’s schedule confirmed to The Associated Press the player’s visit. The person spoke on the condition of anonymity because Hamlin has kept his schedule and recovery private.

Hamlin’s remarkable recovery has made it much easier to focus on the playoffs.

After Damar Hamlin of the Buffalo Bills collapsed during Monday Night Football, fans and the world learned he had a cardiac arrest. Dr. Mike Cirigliano says that while Hamlin is fit and young, there are certain scenarios and causes that could have led up to the injury.

The cancelation of the Bills-Bengals game because of Hamlin’s injury could lead to one big change to the AFC playoff format.

The AFC championship game would be played at a neutral site if the Chiefs and Bills reach that point under a rule adjustment approved by NFL owners last Friday. That’s because Buffalo (13-3) played one fewer game than Kansas City (14-3) and missed out on a chance to earn the top seed. The Bills beat the Chiefs 24-20 on Oct. 16 and would have held the tiebreaker had the teams finished with the same record. Buffalo lost 42-36 at Kansas City in a divisional-round classic last season.

The Chiefs would host the AFC title game against any other team, including the third-seeded Bengals (12-4).

The Associated Press contributed to this report